Thinking About Thinking in the Wake of COVID-19

It’s been quite a while since I’ve updated this website (and blog), but I suppose there’s no better excuse than a pandemic to find new hobbies and restart old projects. Since I first shared the educational materials on this site, I’ve apparently been grad school for over 2 years (time flies!) and, as part of my candidacy requirements, have both the great burden and opportunity to dig into an area of interest of my choosing. In other words, to concoct a massive literature review and research design, in what I presume will be written in much more formal language than what I’ll be presenting here.

I hope that the act of writing a blog post will help me along this ride by forcing myself to maintain some semblance of routine during these unprecedented times, reduce the pressure of needing to generate what I (irrationally) perceive to be a high-stakes perfected document, help me organize my thoughts and inch closer to what it precisely is that I am interested in researching, disseminate this information as part of what the NSF calls “broader impact” (but also because I genuinely do want to make these resources publicly available), and last but not least, better ground my thoughts to real-life solutions and the roots of why advancing education is such an important personal matter.

As for the intended audience, I think these will be for myself as much as it is for my advisor, which hopefully will not be overly irritating given the stark contrast with my typical academic writing style largely devoid of the “fluff” included in these opening paragraphs, and admit that I like incorporating literary flair on occasion despite the fact that growing up, English was my least favorite subject and any job involving writing was beyond my wildest dreams.

But alas, the times have changed at an almost uncomfortable pace and it seems that will continue, so I hope these snippets will serve dual purpose as a somewhat tactful time capsule of my personal and professional thoughts intertwined (in a more tasteful sense than what this normally implies), as well as a meaningful contribution of synthesized knowledge regarding educational technology literature (or at a minimum the literary equivalent of junk food where you really gain nothing but at least feel satisfied temporarily).

Now with that soliloquy complete, I’ll move on to our main motivation: the current pandemic, which is really just a backdrop for a discussion into metacognition, how people think, and how we teach people to think. In truth, I’ve been meaning to write this up for a while, but it has been extremely difficult to regulate my own thought processes and emotions given the roller coaster of chaos that is 2020. Nonetheless, I’ve finally managed to jot down my mind ramblings from the past few weeks in a semi-coherent form, and while I’ve used COVID as a to tether the discussions here, cognition and metacognition can certainly relate to many more commentaries on any number of things on my (or your) mind. Roughly 3 months ago, when much of the lockdowns were first imposed, a friend and I were discussing the diagram below, which is probably familiar to most people by now: 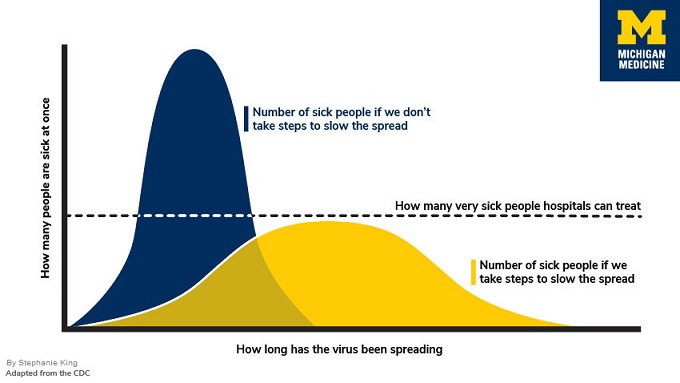 While there are many non-Michigan-branded varieties of this plot, the general phrase “flattening the curve” should be familiar to most by now, but was particularly relevant early on when the predominant counterargument to state health measures (based on my non-scientific observational study in a selection of online spaces) consisted of arguing that the mortality rate was low (i.e. it’s the seasonal flu) coupled with the assertion that “I can make my own decisions about my health.” Even though this has gradually evolved to “we can’t stay locked down forever” (which is true, but was never really the plan and might be better rephrased as a question about the appropriate duration of lockdown), to “what about the effects on the economy and mental health” (which is a fair consideration, but requires a much nuanced cost-benefit analysis than what is typically offered in 280 characters), and now settling on “we have flattened the curve”, which is location-dependent and proving to be somewhat dubious as society continues relaxing restrictions.

Many of these forums illuminate that even though the questions themselves may be good launching points, the level of discourse is oftentimes woefully shallow for complex topics, and that while simplifying matters can be useful and even necessary depending on context and intent, one can draw some deceptive conclusions based on how information is masked and an individual’s processing capabilities. Take the illustration above; I recall my friend mentioning how elegant and simple this picture was and how it was difficult to fathom how people still couldn’t understand the urgency of the situation. Yet, if we dissect this piece-by-piece, it’s actually quite impressive how much knowledge is packed into such an accessible-looking figure, and a fun exercise in avoiding the “expert blind spot” [1], otherwise known as that feeling when you’re in class and the instructors’ explanation goes over everyone’s head, or when a textbook says “the proof is left to the reader” and the reader has no idea what to do.

For starters, comprehending this figure requires one to have basic mastery of knowledge components regarding reading graphs. This means looking at the x-axis and understanding that it is temporal, that the y-axis is the number of people sick at any given time, while also realizing that the exact dates are not relevant for the main idea this diagram is trying to convey. Then, we must know that the 2 overlaid curves involve 2 different scenarios: one with preventative measures and one without. Finally, the horizontal line represents the capacity a hospital can treat at any given time and that this is fixed, at least in this representation (more on that later).

Note that we must utilize knowledge, which I’ll loosely define as “information about things or processes,” and cognition [2], which is an umbrella term that includes thinking and all the mental processes that help us collect, maintain, create, and make sense or use of knowledge . You might be familiar with Bloom’s taxonomy [3] for instance, which is a rough hierarchy (the upper two levels are perhaps more on the same level) of educational objectives. The updated version published in 2001 [4] incorporates knowledge and cognition as its own dimensions and is shown in the picture below: 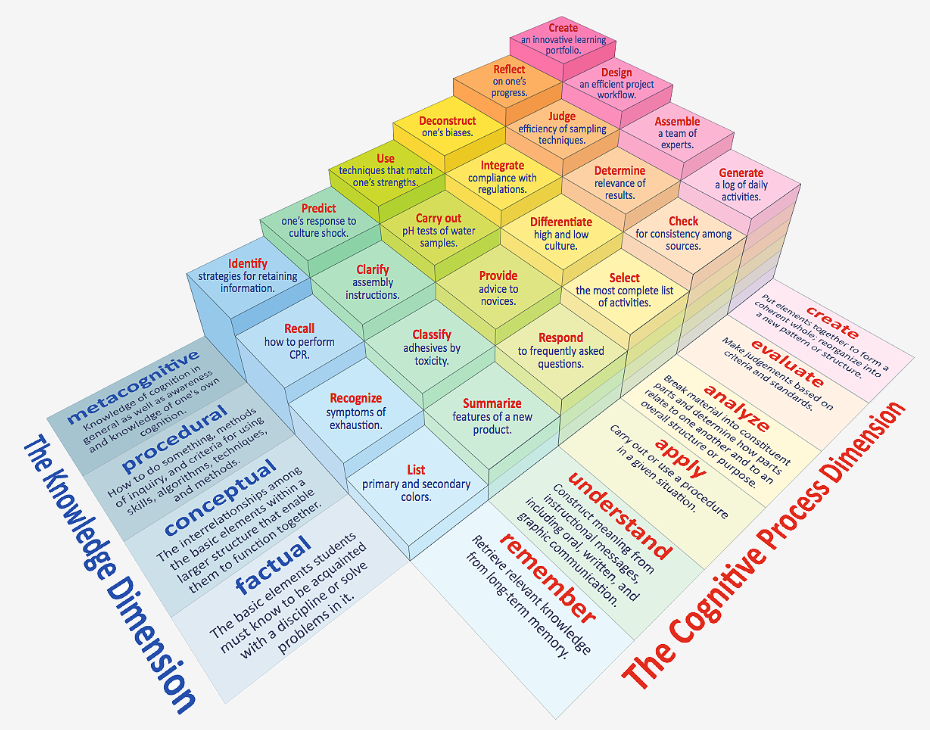 So, in the example above, we have mainly focused on “remembering” and “understanding”, and even then there are quite a few moving gears in the contraption. Perhaps it can be argued that people also “apply” this knowledge when using the figure as evidence for a talking point online. Although, if the facts are incorrectly recalled or misinterpreted then the action is more likely reinforcing an incorrect mental model. This also does not account for analysis and evaluation of the argument, which is necessary and insightful but often overshadowed by instinctual reactions and emotions. To dive deeper into what I mean, the “number of sick people” is actually rather difficult to understand as this is represented by the area under the curve or a sum of the number of people sick captured across a series of time slices (and invoking calculus is always fun even if there’s nothing to explicitly compute). Assuming all that knowledge registers, we might then ask questions such as whether or not the total number of infected people will decrease as a result of preventative measures, or whether this metric will be approximately the same with cases simply spread over time to avoid overloading hospital capacity. Likewise, one might begin to “evaluate” the model and ask if the capacity is fixed. More health care workers might become sick as there are more patients, or more temporary facilities may be constructed which might yield a slight boost and morph the horizontal threshold, and interestingly enough, all of this only scratches the surface regarding translation in terms of realistic societal consequences (e.g. overloaded hospitals effects on treatment of other ailments and overall public trust) and practical potential actions (e.g. weighing who gets treatment, balancing personal protections, and anticipating public response).

However, if people already have a hypothesis in mind, it can be difficult to sway our own minds contrary to the status quo thereby impeding our ability to analyze/evaluate with sufficient breadth and depth. This is especially the case when we have a particularly invested interest in something or when topics which elicit visceral reactions such as politics or personal family matters. Putting aside affect for now, say we can identify pieces of the graph but do not necessarily comprehend what we’re seeing (not moving past the second level of the taxonomy), then it becomes almost impossible to have an informed opinion unless we’re able to judge our own understanding, identify this gap in knowledge, know how and where to fill this hole, have the strategies to learn from other sources, and actually muster up the motivation to set these plans in motion. In other words, knowing and thinking are often not enough; we need “thinking about thinking,” or in other words, metacognition. But, I’ll leave that for another time and instead share this cellular automata simulation of an epidemic and a great video of exploratory analysis on this topic as well.