On the merits and follies of hand-written code

If you’ve been in a computer science class, you’re bound to hear someone complain about hand-written code during tests or quizzes at some point or another. Oftentimes, the debate goes something like this:

Oblivious Student: “This is so stupid and unrealistic. When will I ever have to hand-write code?”

Old-Fashioned Professor: “This is an important and fundamental skill–think about the job interviews!”

Fair enough. For instance, there are plenty of books and articles about technical interviews and this video to guide applicants towards that coveted position at Google:

On the contrary, you also occasionally come across this, 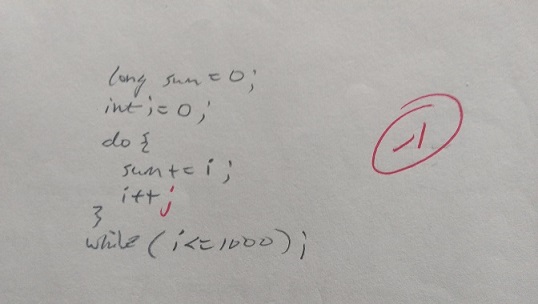 which is less justified. For context, this was from the first test (75 points total) for a second-year OOP class that follows an introductory course and a data structures course. The task was to simply rewrite a for loop using do while, and yes, the remaining questions were less trivial. Anyway, here’s an excerpt from the end-of-year course evaluation:

…Perhaps I have the wrong impression of this course, but I always imagined it as more conceptual. However, the exam scoring, although mostly fair, does not always reflect this. For example, taking off points for a missing semicolon seems like overkill. If this were CS1250 and someone wrote if(yada yada condition); then I could see why that would be a conceptual problem. However, if someone writes the following: int num = 0; num++ and forgets a semicolon, it’s probably acceptable, unless this is a course on how to be a human compiler. Similarly, another student wrote the mathematical “greater than or equals to” symbol instead of >= and got marked off for recurring usages. Let’s agree to your two mark deduction for this “error”. However, it is bordering on ridiculous to count this same concern thrice. Furthermore, a common argument for paper and pencil tests in CS is for company interview questions or something of that sort. Even then, I’m willing to bet you won’t lose a job over a semicolon, and if you do, it may be for the better…

Admittedly, there will always be some level of subjectivity when grading, and some may not agree with the exact analysis above. Nonetheless, it’s important not to lose sight of the forest for the trees (or some other cliché of your choice). To illustrate, even the AP Computer Science grading guidelines seem to agree with this view (see the “No Penalty” section on page 2). The purpose of an assessment is to assess, not to conduct a number-generating ritual. When used correctly, it can provide insight into student learning and guide one’s teaching. Of course, the big question is whether hand writing code is actually a helpful measure, and if so, how do we design good questions? I certainly can’t claim to have absolute answers to any of these questions, but I can share some relevant stories.

As a student, I too was unsurprisingly skeptical when it came to hand writing code. Yet, my stance shifted when I taught my first course for LaunchCode. Long story short, I met biweekly with a group of roughly 20 students from various backgrounds who had little to no coding experience. The first unit of the program covered essentials such as variables, operators, control structures, etc.

Loosely mimicking a flipped-classroom model, students would go though a majority of the prep work and instruction at home, come in for an auditorium-style lecture, and then split up into respective classroom-sized groups. At that point, we (the teaching fellows) would handle things on our own accord. We were provided in-class materials for each session. Consequently, I would read it over, maybe make a few comments or adjustments, and then encourage everyone to form groups with varying degrees of success (more on this in a later post). After allowing everyone some time to figure things out, I would start making my way around the classroom, trying my best to speak with each and every student.

The first few projects were fairly tame, but it didn’t take long before I noticed issues brewing in the horizon. Specifically, when students were finished, I tried gently probing them with a few questions such as why did you use elif instead of else? What does this function do? Can you walk me through your code? Some were able to discuss their process, but I also had a non-zero amount of blank stares, and some refreshingly honest answers like, “Dude, I have no clue what I did. I just kept typing stuff until the errors went away.”

In all fairness, experimenting around is a great way to learn. My earliest exposure to programming involved playing around with KTurtle years ago, which is an educational programming environment that uses a language based on Logo. During this phase, I attempted an Oregon Trail knockoff as well as a half-finished calculator for computing “taxes” that I wanted to collect from my cousin’s account on my Animal Crossing game. The spaghetti code resembled something like this:

Somewhat functional, but ugly and hard to modify. Perhaps, I would have eventually developed more descriptive variable names and organizational skills, but sometimes, light guidance in an open sandbox can help accelerate the learning process tremendously.

With that in mind, let’s return to LaunchCode. I decided to have the class split into four groups. To provide diagnostics, I passed out a no-computers-allowed “quiz” to one group (which made some people uneasy, even though there were no formal grades), and then helped out other students with the in-class project. Afterwards, I would return to the quiz takers and discuss questions, misconceptions, and so forth before repeating this procedure with the remaining groups. Of course, it took some gesture reading and words of encouragement to ensure everyone was on the same page, but generally, the small circle seemed to alleviate students’ reservations about sharing wrong answers. 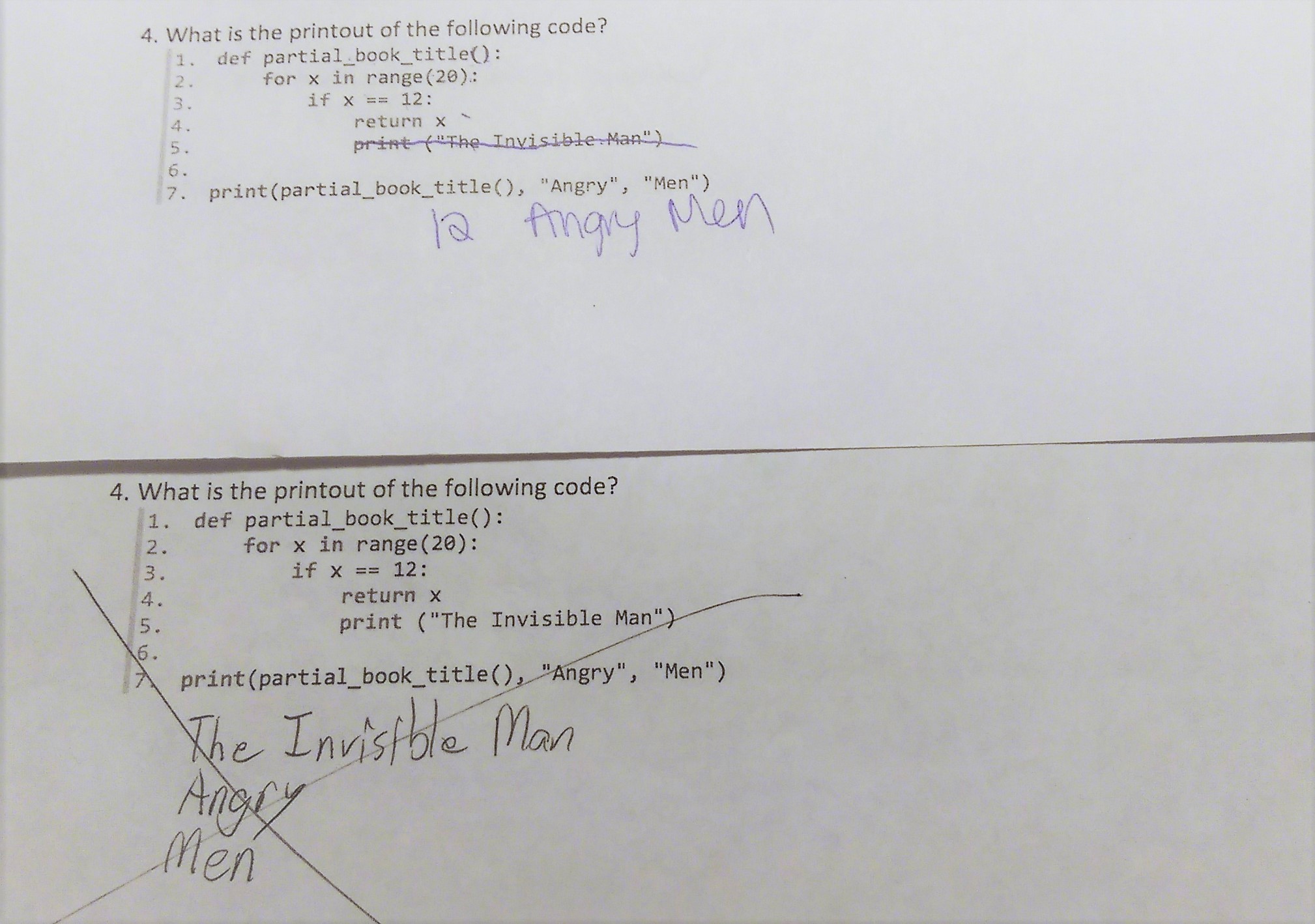 The key concept is that return will immediately exit out of the function, and so the print statement below is effectively invisible (get the joke‽). Anyway, when I asked for feedback, many students expressed that these exercises were very helpful and surprisingly requested more, thus I had a rather fun time writing them.

I also have a link to the Thanksgiving edition, and the Polar Express Christmas edition, which ramps up in difficulty just a tad and involves writing a few lines. The objective of the final quiz of the semester was to provide some practice with classes and inheritance, especially since we were feeling rushed. As a result, I also made my first teaching video. It’s somewhat embarrassing, but I thought I’d share:

The exhilarating sequel can be found here. All in all, students really seemed to appreciate these additional resources, and I suppose what I’m about to say won’t be all that surprising: writing code can be a great exercise that forces one to pause and ponder about what’s going on behind-the-scenes. However, like most educational tools, your mileage may vary. If the questions are crafted and evaluated with particular goals in mind, you’re likely to see better results, and if you use a meter stick to measure weight, then the only result will be nonsense.